In December 2015, scientists published an article in the Sports Medicine journal providing an overview of the research on the use of standing desks in classrooms around the world.  The thirteen studies reviewed were conducted in Australia2, Belgium3, Finland4, Germany3, New Zealand5-7, the United Kingdom2 and the United States8-15.

Many of these studies were considered to be a “natural experiment”: while changes were made to the classroom furniture, it was the children who voluntarily decided how they would use the furnishings (i.e., how long they would sit or stand).   The studies ranged in duration from four week to two years and included children ages 6-16 years old.  Samples sizes ranged from 8-202 participants.  Different interventions were used, including sit-stand desks that move up and down manually and height-appropriate standing workstations with exercise balls, beanbags and mats nearby (see Figures 1-3 below).

Figure 1: In the United States, Benden et al. used stand-biased desks and stools in their school interventions.8-15  A stand-biased desk is at a fixed height (adjusted to an appropriate level for the child) and can have a footrest.

Figure 2: In New Zealand, four to five children with similar floor-to-elbow height shared a standing workstation without stools.5-7 Exercise balls, beanbags and mats were available for the children to use if they were tired.

Figure 3: In Australia and the United Kingdom, children ages 9-15 years old used individual height-adjustable sit-stand desks.2, 16  These desks had a manual lever that moved the desk up and down, allowing the children to work in a seated or standing position. Stools and/or chairs that already belonged to the schools were used with the desks.

Irrespective of the type of desk used, these studies found that the children spent less time sitting and more time standing, when compared to control conditions (i.e., classrooms with the traditional sitting desks).  This remained true even when stools, exercise balls, beanbags and mats were placed in the classroom for children to use, suggesting that “when children are given a choice between sitting and standing during class, the studies suggest that children choose to sit less”. 1, 6-7  The children’s energy expenditure (i.e., the number of calories children burned per minute) was also greater in the standing classrooms.   Additionally, school staff noted the potential for improved management of students’ behavior in the standing classrooms. 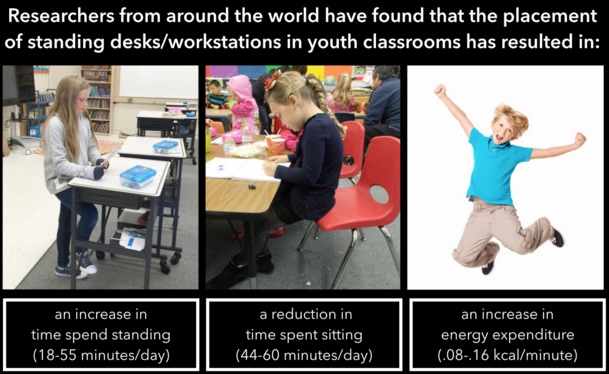 While additional research with larger sample sizes are needed, as well as research that assess the academic benefits of a standing classroom environment, these preliminary studies have found promising health benefits for youth around the world.   Interventions aimed at reducing sedentary behavior during childhood would help establish lifelong healthy behaviors, and improve the health of children as they mature into adults and enter the workforce.14  According to Dr. Erica Hinckson of Auckland University of Technology’s Centre for Child Health Research and National Institute of Public and Mental Health, “As experimentation turns to policy and exception to practice, we anticipate the installation of activity-permissive learning environments to become standard”. 1